I finally got around to digitizing my 1993 documentary, Tuning in to Media: Literacy for the Information Age, which I produced with Rob Stegman of Blue Star Media in Boston as part of the Harvard Institute on Media Education. What a trip to see my 80s hair! 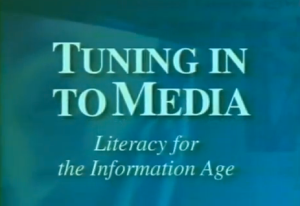 Seeing it again after many years, I remember the thrill of assembling luminaries such as Neil Postman, Barry Duncan, Kathleen Tyner, Joshua Meyrowitz and Bob Kubey for a screening and discussion of the Rodney King beating and the Los Angeles riots. For me, it was a great learning experience to create this documentary, as I got to participate in the full production experience: raising the money, developing the concept, writing the script, gathering footage, editing, voice-over, post-production, and distribution/marketing.

I had thought the program would be about teachers and students using media literacy in the classroom, but when an amateur video of Los Angeles police officers beating Rodney King hit the national airwaves, we were all shocked. Many Americans had no idea what police brutality looked like in large urban centers.  Amateur video was a new phenomenon. It came as a surprise then, when the jurors in the trial convicted only one officer who was found guilty of excessive force; the other officers were cleared of all charges. The verdicts were broadcast live, and word spread quickly throughout Los Angeles. At various points throughout the city that afternoon, people began rioting.

I remember that Elizabeth Thoman was about to head home to Los Angeles the very day the riots began after participating in a media literacy conference on the East Coast. It was a tragic experience for her to come home to her city in flames– and it was a difficult time for all Americans. At the time, it seemed as if the chaos in the city reflected the depth of public confusion about the relationship between the world of symbols and the “real” world. For the next three days the violence and mayhem continued, covered unflinchingly by the news media. People stayed home, watching on TV with the rest of the country as live TV coverage showed fires raging throughout the city, innocent bystanders being assaulted and looters sacking businesses. It was the worst civil unrest the city had experienced since 1965: more than 50 people were killed, over 4,000 injured and $1 billion in property damage.

I’m just as troubled today as I was in 1993 about the level of desensitization in our society – and its impact on the quality of our democracy. As it has ratcheted up, we are left with quite an “empathy gap,” as genuine feelings that lead to action are drowned by a barrage of sensation provided to us by both news and entertainment. I suppose I’m still attracted to media literacy’s potential to activate our critical awareness and help us “wake up” both cognitively and emotionally to the role we play as citizens in making a difference in the world.