This blog is a summary of the chapter “Media Literacy Education in the Era of Post-Truth: Paradigm Crisis” that will appear in the edited collection Media Literacy Research and Applications Across Disciplines (2019) edited by Melda N. Yildiz. To read the full chapter, please contact the authors at elizaveta@mediaeducationlab.com and yfriesem@colum.edu.

The history of media literacy education has been always characterized by debates. The field grew out of the melting pot of ideas about popular culture, human nature, politics, social inequalities, communication, and education. We suggest looking at this bright variety of ideas through the prism of Kuhn’s theory of scientific revolutions.

In 1962, Thomas Kuhn described a cycle of stages that all scientific disciplines go through over time. It included the following steps:

This change is followed by the new normal science stage, and the cycle is repeated.

We suggest looking at the development of media literacy education through Kuhn’s model and through several formative debates that have served as a manifestation of the field’s evolution. Our choices are a matter of interpretation, yet we believe that they can offer valuable insights. 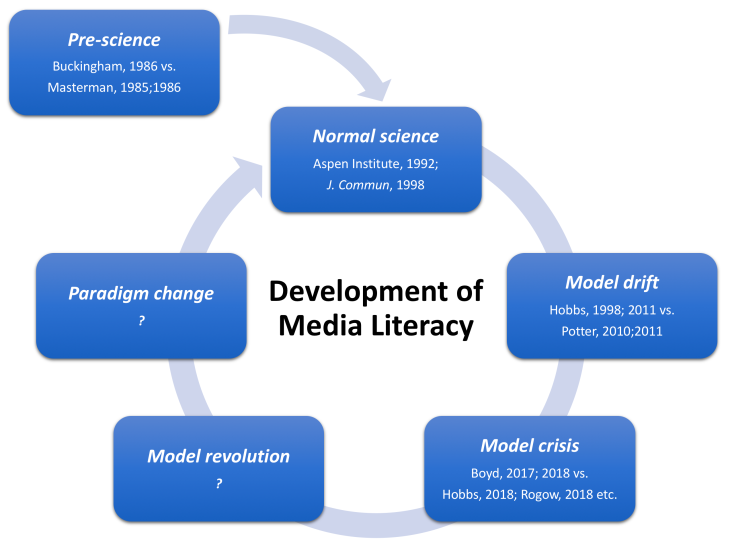 One can find proto forms of media literacy education as early as the beginning of the twentieth century. Back then, the emergence of powerful media technologies led to the intensification of fears about the media’s role in society. First attempts to educate people about the media were made, and media education emerged. Yet there was no consensus about what it is and how it should be done. This was pre-science of the field.

The first attempts to formulate a consensus can be connected to a debate between Len Masterman and David Buckingham that took place on pages on the Screen journal in 1986. Importantly, in the volume Teaching the Media, which Buckingham criticized, Masterman started using the term media literacy. This debate revealed a rift between two foundations of media literacy education – media scholarship and educational practice – although neither of the opponents represented only one of them.

In 1992, U.S. national leaders of media literacy education gathered at the Aspen Institute and created a definition of media literacy as the ability of a citizen to access, analyze, and produce information for specific outcomes. This definition signified the beginning of normal science. The fact that in 1998 the high-ranking Journal of Communication devoted a special issue to media literacy served as an additional proof. However, the variety of opinions expressed in this issue showed that the rift between scholars and practitioners persisted. In her article from this issue “The seven great debates in the media literacy movement,” Renee Hobbs described a number of other important debates of that period. Although consensus has been achieved, it was not without contradictions.

Underneath the visible consensus and the debates that defined media literacy education of the time was an important assumption essential for both scholarship and practice. It was the belief in the need to understand a certain truth about mediated communication, and the world in general. Media literacy education was supposed to achieve this goal.

As time passed, it became evident that the foundational rift between media scholarship and educational practices was not going anywhere. This was the model drift stage, and a debate that characterized it took place between W. James Potter and Renee Hobbs on pages of the Journal of Broadcasting & Electronic Media in 2010-2011.

But the current model of media literacy education received a much bigger blow in 2017-2018, when media scholar and Microsoft researcher danah boyd published her provocative posts and made a controversial speech at South by Southwest conference (see the refences below). Teasing out the underlying assumption that the precarious consensus of the normal science stage was built on, boyd suggested that the field was unhelpful for dealing with the crisis of knowledge in the era of post-truth.

A number of scholars and educators published their responses, criticizing boyd’s definition of media literacy education and her misinterpretation of the field’s practices (see the references). Although boyd’s intent to provoke the debate should be acknowledged, she pointed out important limitations of the current model, thus introducing what can be interpreted as the model crisis.

One of the main challenges of the new cultural context is the shifting understanding of truth, which the so-called post-truth era has made apparent. It revealed the insufficiency of epistemological assumptions shaped by modernity. When teaching students to be critical thinkers, media literacy educators focus on the personal responsibility to get to the truth about the media and the world. But who decides what the truth is? We may say that we invite a variety interpretations but there is always a limit. As soon as a student in our class says something that undermines our basic values and beliefs, it will quickly become clear what truth we support.

In order to remain relevant, media literacy educators’ efforts to develop their students’ critical thinking need to take the epistemological crisis into consideration. But on the current stage it is too early to talk about solutions. Acknowledging the underlying assumptions of the current model and their limitations is a priority.

boyd, d. (2018, March 9). You think you want media literacy… do you? Retrieved from https://points.datasociety.net/you-think-you-want-media-literacy-do-you-7cad6af18ec2

Doctorow, C. (2018, March 9). How denialists weaponize media literacy and what to do about it. Retrieved from https://boingboing.net/2018/03/09/how-denialists-weaponize-media.html

Doxtdator, B. (2018, March 10). No, ‘cognitive strengthening exercises’ aren’t the answer to media literacy. Retrieved from http://www.longviewoneducation.org/no-cognitive-strengthening-exercises-arent-answer-media-literacy

Noula, I. (2018, June 21). I do want media literacy… and more. A response to danah boyd. Retrieved from http://blogs.lse.ac.uk/mediapolicyproject/2018/06/21/i-do-want-media-literacy-and-more-a-response-to-danah-boyd