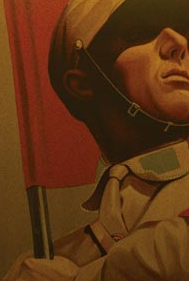 I was lucky to be able to participate in a fascinating event at the U.S. Memorial Holocaust Museum in Washington, D.C. More than 50 students from 40-plus states came together for a leadership summit. In three days of learning, students gained knowledge about the Holocaust and examined the role of Nazi propaganda in promoting political polarization and a spirit of indifference.

At the heart of the program was a visit to the special exhibit entitled, “State of Deception,” an examination of the Nazi’s use of print, film, broadcasting, and even toys, parades and other media to convey their messages, which sometimes seemed benign and even positive. Students learn that the loudspeaker was a new technology of the time, enabling Hitler to speak to more than 10 million people in over 200 large-scale rallies in a single year. During Hitler’s rise of power, propaganda enabled the Nazi party to gain visibility in a crowded political landscape. Then it was used to consolidate power and exclude Jews and others from the national community. By 1939, propaganda helped create a climate of indifference to the elimination of the Jews and others deemed “undesirable.”

Today, propaganda is a ubiquitous part of everyday life. Truths, half-truths and lies are part of daily discourse in news, advertising and online. Complex issues are simplified and activate our emotions, targeting audiences very precisely in order to influence public opinion. But despite the negative connotation of the term, propaganda has a key role in contemporary life. When it is not deceptive and when people can freely choose to accept or reject the message, propaganda is used for many worthy purposes. Bit since every message comes with a visible (or invisible) agenda, media literacy competencies are more important than ever before.

At the leadership summit, there were many opportunities for reflective discussions; probing questions encouraged students to make connections between the historical past and their own lived experience. Today’s college student leaders have grown up exposed to a wide range of 21st century propaganda in both the militaristic legacy of September 11th and the rise of social media.

“Even though we are surrounded by it in the world of politics, entertainment, news, in the workplace, and even among our family and friends, we are not immune to propaganda,” one student pointed out. “Propaganda has evolved, and it’s perhaps even more effective today.”

In discussing with students the promise and perils of social media, I examined how social media can be used as a means of propaganda and a tool for celebrating hate, as well as a powerful vehicle of civic engagement. Students recognized the power of connecting people through interest-group networks as well as the danger of Facebook “liking” becoming a substitute for genuine political action. They identified the importance of being self-aware and reflective about how their online actions line up with their ethical values.

Highlights of the program included a conversation with Bob Behr, a Holocaust survivor, 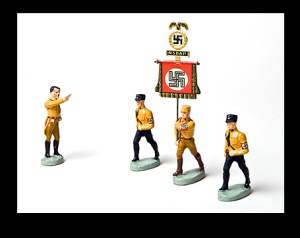 who described the psychological pain of growing up and being increasingly alienated from his culture. Benches that said, “For Jews Only” and big signs at the ice cream shop and the municipal pool that read: “Jews not wanted here” created fear and promoted deep-seated feelings of inadequacy. Carl Wilkins, an American missionary who stayed in Rwanda throughout the genocide in order to support the needs of children in a Kigali orphanage, also inspired the hearts of all participants, helping us see both the resilient spirit of the Rwandan people and the flawed thinking at the heart of genocide: the belief that problems can be solved by excluding people. Charles Haynes, Director of the Religious Freedom Education Project at the Newseum, explored the relationship between campus “speech codes” and the First Amendment. Martha Bixby shared her experiences as a leader in the Save Darfur Coalition. Amy Lazarus, Executive Director of the Sustained Dialogue Campus Network, modeled practices that show how “everyday leaders” emerge when dialogue creates trust and respect that inspires new ideas and fresh ways of thinking. And Bill Adair, founder of Politifact, pulled back the curtain on the current spin-centered, media-hyped politics where a sensational soundbite often leaves truth in the dust. Throughout the program, Holocaust Museum Education Initiatives Manager JoAnna Wasserman, along with a team of student leaders, guided participants towards recognizing the heart of leadership: cultivating respect, love, and generosity as a means to create a culture where hate cannot flourish.

2 thoughts on “What You Do Matters”