All week long, people asked me, “What makes the 2019 Summer Institute in Digital Literacy so special?” For me, the answer is obvious: the Brazilians!

Origins of the Relationship

When I went to Brazil in March of 2018 as part of the U.S. State Department’s outreach program, it was my third visit to this beautiful country of 209 million where there are more cell phones than people and the Internet is the most common vehicle for news consumption. I got to meet with some amazing educators in Sao Paolo and Brasilia who are working to bridge the cultural divides between rich and poor. For example, in Sao Paolo, Educom Geraçãocidadã is a program where students from a private and a public school met regularly to engage in creating media together.  In talking with educators and policymakers about the rise of fake news, propaganda and digital misinformation, research shows that at least 86 percent of voters encountered fake news during the 2018 election cycle, particularly via WhatsApp and Facebook. Therefore, promoting critical thinking and digital literacy education has become a priority in Brazil.

When a delegation of Brazilians visited us at the Media Education Lab in the Fall of 2018, I got a chance to deepen my relationship with Patricia Blanco, CEO of Palavra Aberta Institute, a non-governmental organization that promotes and defends freedom of expression and freedom of press.  Think of Palavra Aberta as the Knight Foundation of Brazil. At that meeting, I suggested that she bring a group of educators to the 2019 Summer Institute in Digital Literacy. During that meeting,  my colleagues Pam Steager, Frank Romanelli and Carolyn Fortuna also got to share their expertise. Together with the Brazilians, we discussed the six essential ingredients to build a media literacy movement: 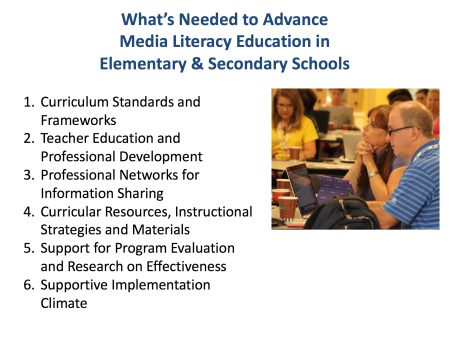 It was thrilling to feel the strength and resolve of this team, who understood the need for sustained collaborative work over a number of years. But they recognized that leadership in media literacy was needed — and they rolled up their sleeves and got right to work.

With support from Google and the U.S. State Department, Patricia Blanco was able to accomplish a significant goal, bringing a team of delegates to the United States, including Daniela Machado and Mariana Ochs, two talented media professionals who lead EducaMidia, a program designed to train and engage teachers and educational organizations in media education, aiming to develop youth’s communicative potential in various media formats, starting with the skills to critically interpret information, actively produce content and responsibly participate in society.

Carla Arena, is co-founder of AMPLIFICA, a company focused on creating learning experiences for educators, educational and corporate leaders. An educational technology guru, she’s built makerspaces and coordinated the Department of Innovation and Technologies at Casa Thomas Jefferson, a bilingual institution in Brasilia. Other team members included Raquel Stenzel, a journalist with over 20 years of experience at Reuters in Brazil as a reporter, editor and head of training for Latin America. As a trainer, she created and taught hands-on courses for Reuters journalists throughout the American continent on topics such as macroeconomics, general news, ethics and corporate news.

Estêvão Zilioli, a science and biology teacher whose passion for science led him to create the Hoaxbusters project, in which he encourages high school students to question information on the web. Marcio Goncalves, a PhD in Information science and a college professor who has written a number of books about digital and social media, including work on media education. Ana Claudia Ferrari worked in educational publishing and developed a digital platform for K-12 students in Brazil. Saula Ramos has worked at major advertising agencies and in the marketing department of large companies such as Brinquedos Estrela and Natura before joining Instituto Palavra Aberta as project manager. Also on the team were Maura Marzocchi, Karla Eufrasino, Dominique Gogolevsky, Clarissa Bezerra.  Stay tuned for more information about their exciting work!

4 thoughts on “The Brazilians”