It is the age of heroic princesses.  We see them in the media more than ever. Courageous and noble warrior women are commonly the stuff of Disney films. Of course, Mulan, Moana and Pocahontas come to mind. But real life princess heroes? Look around. You may be lucky enough to have known a princess hero in real life, as I have.

I have long viewed Professor Maria Ranieri as a most valued thought partner in the field of media literacy education. She is a frequent visitor to Rhode Island and she has participated as a faculty member at the Summer Institute in Digital Literacy and helped lead the Symposium on Digital Literacy in Higher Education. When the coronavirus epidemic struck Italy, her Facebook posts gave me insight on her coping strategies. But it wasn’t until after our Zoom video chat that I realized that I was in the midst of a veritable hero. 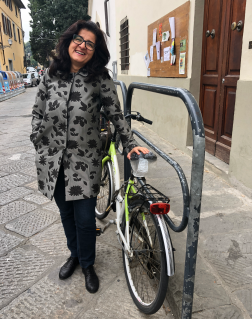 Maria described the personal and professional challenges that began for her and her extended family members on February 25th, when she was first informed by academic leaders at the University of Florence to prepare for the possibility of some courses going online. At that meeting, faculty were advised to use Moodle or G Suite for Education to deliver their lectures. With 50,000+ students, faculty at the University of Florence, like many European professors, teach large lecture classes with 300 or more students in a class. School leaders informed them that a 60-minute lecture should be compressed into 2 videos of no more than 20 minutes in length.

At the meeting, Maria Ranieri pointed out that uploading video lectures is not a sustainable strategy for the shift to online learning. As an expert on educational technology and a leader of the digital learning task force at the university, she knew that resistance to online learning was widespread among her colleagues. At elite Italian universities (Italy’s universities are the oldest in Europe), online learning is often thought of as lower form of education, inappropriate for high-status academic programs and departments. Plus, at a more fundamental level, she knew that the university servers lacked capacity for so many video uploads and downloads. Uploading and downloading would slow, and the system would grind to a halt rather quickly.

When she returned from the meeting to give her lecture class the next day, she observed that most of her students were sniffling and coughing. Each sniffle and cough brought anxious expressions to the faces of other students. She decided to suspend her classes and teach online. Although young adults often feel immune to disease, a large proportion of students live in multigenerational households. Maria could sense that what students needed most was emotional support, interaction and care, and the chance to learn about the coronavirus and the risks to health. Her students thanked her for her efforts.

In the days that followed, Maria’s anxieties became intensely personal, as her concern about her extended family members grew. At first, some of her family did not seem to appreciate the serious nature of the crisis. Eventually, they all decided to stay at home, stopping face-to-face visits to her elderly mother. It was not an easy time for this interdependent and loving family.

Accepting the Reality of the Situation

When her academic department of 150 faculty and lecturers held an emergency virtual meeting on February 28th, the announcement came forward: classes were suspended until March 15. During the break, faculty would be expected to prepare to deliver the curriculum online.  Maria and her colleagues from SIREM sprang into action, forming a WhatsApp group to interact and share ideas. Within 14 hours, they had written an orientation document to help faculty cope with the transition. In it, the key messages included the following ideas:

This pandemic princess was particularly inspired by the leader of her institution. When the University Rector (the equivalent to the President) shared a tutorial for faculty, showing how he had used his mobile phone to record his lecture, email the file to himself, and then upload it to Moodle using his laptop, Maria was overwhelmed. She recognized that everyone was part of the solution, wherever they were in their own learning curve. Her frustration and anger subsided, despite the many challenges and limitations she could foresee. She explained, “I finally came to accept  my reality.”

During the week, Maria and her team worked to operate a department-wide help desk for her colleagues. Over the course of many 14 hour days, together they learned to:

In the process of helping others, Maria discovered that the crisis held the seeds of an amazing opportunity for learning. For example, she discovered how an online examination could be offered securely. She learned how to use active interaction in her online synchronous lectures.

None of this was easy, and Maria acknowledged the many ups and downs of the process. Tears, confusion, frustration and laughter were all part of the process. And the work continues unabated even now, as the death toll rises in Italy and people’s fears for themselves and their loved ones grows even more intense.

Maria Ranieri changed the reality of teaching and learning in Florence, Italy at a time when leadership and imagination was most needed. She used her personal virtues of integrity, compassion, and wisdom, demonstrating care and respect for her colleagues who were just beginning the journey into online learning.

Maria Ranieri’s commitment to take action is a form of socially- engaged compassion. As Phillip Zimbardo notes, real-world heroes suspend the usual egocentric preoccupations, replacing it with a genuine concern for connecting to the needs of others.  Her efforts have inspired the heroic imagination in many of her colleagues, in Italy and around the world.

These efforts are ever more important when we realize that this powerful mindset is the challenged every day by its opposite: “the ‘hostile imagination’ that fuels a psychology of enmity. It is what every nation’s propaganda machine works to instill in its people, to hate a given enemy enough to suffer war and death of its soldiers to oppose that evil demon” (Zimbardo, 2011, 403).

In the days ahead, inspired by Maria Ranieri, this pandemic princess, I hope to discover how small acts of compassion can help us resist fear. It may help us transform bad situations. We may even discover opportunities we might never had noticed without the crisis. Stay safe, Maria! Stay safe, everyone!